Hello, I have a problem with my current model: iakofinal.mod (2.9 KB). The steady states found by dynare are exactly the values I set in the initval block. However, when the interest rate set by the central bank is shocked, the IRF shows that investment increases by a lot, thus increasing production. Do you think there is a timing problem in my mod file ?

You should try to understand the economic logic behind your result to see whether it makes sense. Start with a simpler version, e.g. a simple Taylor rule with output feedback or smoothing, no adjudtment costs for investment etc. Such variation may be informative where the result comes from.

Thank you for your answer professor Pfeifer. I double checked my code and I had forgotten the FOC about capital for the consumer. Now investment decreases on impact after an interest rate shock and production falls.

I have tried several specification for the Taylor rule as you advised me, and several calibrations, but the interest rate always have more or less the following pattern after the shock: 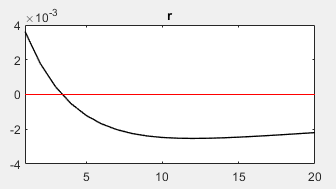 Do you know where the problem could come from ?

Why do you think there is a problem here? If investment goes down, the capital stock will fall below steady state. At some point, this capital stock needs to be replenished.

Thank you for your answer professor Pfeifer.

The pattern for investment makes sense indeed. However the pattern for interest rate is still a bit confusing. I would have expected to see the interest rise above its steady state value and decrease monotically to reach 0, but not to fall below 0 for several quarters and to come back to its equilibrium value.

Is this the nominal or real interest rate?

It is the nominal rate (please forgive me for this late reply).