Why we don't have monetary policy shock in ramsey_policy

Is it because the output gap, inflation rate, and the price level are all just the zero line? Thus, they do not respond at all to monetary policy shock if monetary policy is optimal?

In the paper by Stéphane Adjemian, Matthieu Darracq Pariès, and Stéphane Moyen, for example, there are no results for monetary policy shock under Ramsey model. I expected this, but is my reason above correct?

When you are computing the optimal policy under commitment (Ramsey olicy), you are looking for the best possible policy. Why would you add a random shock to it?

Oh, I see. Thanks! So in evaluating policies (maybe even including suboptimal policies), we do not need to add a monetary policy shock?

Here is my problem though: (maybe, not a problem, but my lack of knowledge)

I guess we are only using cost-push shock to compute optimal monetary policy numerically so it does matter, yeah?

You want to compare the effect of an exogenous shock when using different policies. You don’t want to study the effect of a shock that modifies a policy

Thanks for the clarification. I think I misunderstood this statement from Gali (2015) chapter 5.

“The (optimal) policy (i.e., in chapter 4) requires that the central bank responds to shocks so that the price level is fully stabilized”. Of course, Ramsey’s optimal policy does not require full stabilization, but if I may ask, the shocks in that statement exclude monetary policy shocks, right?

And if I understand, adding a shock to an optimal rule will make it not optimal because inflation and output gap would no longer be zero, for example, under full price stabilization?

How does the feedback rule work though in the real world, if I may ask?

In the real world,
I sometimes think monetary policy shocks (resulting from, say, exogenous exchange rate depreciation or some exogenous event)—affect expectations and hence output and inflation. Output and inflation then affect interest rate (the policy). So like the feedback is not really observed in the real world unless the monetary policy committee meets more than once in a quarter.

For an annual model, the feedback rule seems plausible in the real world as the monetary policy committee meets many times in a year. Are my thoughts correct? I asked a similar question in an earlier post…so I will delete that.

There are two aspects to consider here:

Like even if the monetary policy committee does not meet or meets too late, the effective federal funds rate can still change (via the shock), right? If I understand…

Also, it seems the effective rate (i.e., the average overnight interbank rate) can deviate quite substantially from the policy rate itself. 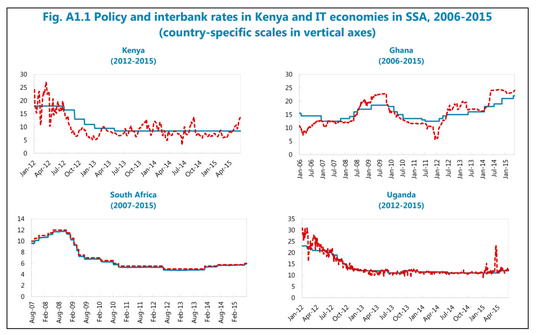