I’m trying to estimate a RBC-model in Dynare where i have specified variables, model et al, but i still have troubling estimating the file in Dynare (please find attached screen-shot).

Thank you in advance. 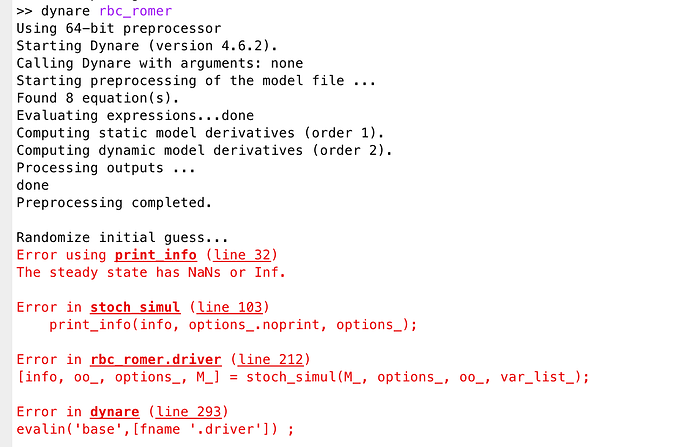 without seeing the file it is impossible to say where the error comes from. But as it is written on the picture, there are NaN’s oder Inf’s in the steady state. Thus, this is where you should start.

Thanks for your reply! If you have time I’ve attached the .mod file - also I’ve had some trouble with were I should specify what dataset the estimated rbc-model is based on if this is something you have knowledge about?

I’m new user of Dynare so sorry for all my questions!

Before you do estimation, making simulation work should be your goal. There is a very instructive guide by Johannes Pfeifer about the specification of observables etc. It is called “A Guide to Specifying Observation Equations for the Estimation of DSGE Models”. And of course the Dynare Manual is your friend.

Back to your file. First, there was a closing bracket too much in line 20. After fixing that the problem I get is that the symbol N is not defined. I do not know your model, so I am not sure whether it is a endogenous or exogenous variable. If it is the former, you would need an additional equation.

I think your ‘N’ is your ‘lab’, and they both represent labor in your model. So you need to replace ‘N’ with ‘lab’.

Yes the small errors was my mistake and I’ve corrected them in my .mod file now however i still cannot estimate the parameters in the simulation since i still receive an unknown error in Dynare?
Thanks.
rbc_romer.mod (702 Bytes)

There is a problem in the equation w =(1-calpha)*(k/(z*lab)^(calpha))*z;. You give z a starting value of zero, hence there is a division by zero which does not work. That is why Dynare is not able to calculate the steady state. Did you solve for the steady state analytically?

I didn’t thought of that, thanks! but even though I correct z=0 there is still an error problem - do you have any ideas of how i can solve these problems? It is a baseline version of the RBC-model.

i’ve tried to solve the steady state analytically with the command “steady” but with no luck either.

By analytically I mean writing the equations down with pen and paper and solving for the steady state. It is a small model so I guess this is possible.
And you did not declare initial values for all endogenous variables, if you do not explicitly state an initial value, Dynare assumes 0.

You also did not solve the problem, you just changed the name from z to A. And as you did not declare and initial value for A is assumed zero and you have the same problem as before. You should really sit down and solve the model analytically.

Why do you have ‘crho’ in the Euler equation? As I see it is a persistence parameter of the technology shock. I think it should be ‘cbeta’ over there.

It is stated as crho in HH utility function.

It is just a notation. In your codes ‘cbeta’ is the discounting factor, whereas ‘crho’ is AR(1) coefficient of technology shock.