Some variables are missing

I checked all the equations and there is no nominal money stock.
After running the model, the following graph shows that only the “r” shock tends to zero, and the rest of the variables tend to have another constant value. Can this explain this problem?
Also, amounts of VARIANCE DECOMPOSITION, MATRIX OF CORRELATIONS, COEFFICIENTS OF AUTOCORRELATION and THEORETICAL MOMENTS are only available for the variable of r. 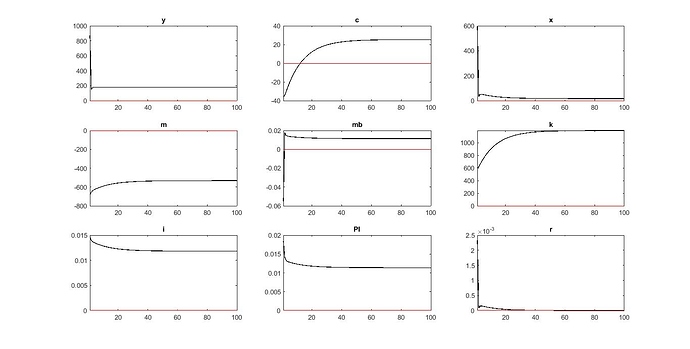 The problem was solved by placing ybar instead of y (-1) in the Monetary Policy reaction function. Do you think the gross growth rate has trend?
I think the results are in the section APPROXIMATED VARIANCE DECOMPOSITION and STEADY-STATE RESULTS are a bit suspicious. Because technology shock has a great impact. Also, the values of y, c, k, n, m, and x represent large numbers in steady state. Can this be true?