I have two questions about the interpretation of smoothed variables after an estimation (or even with calib_smoother). Suppose I have a model with output, capital, hours worked, and consumption. I feed in data for output, consumption, and hours worked, and afterwords Dynare generates smoothed capital. Is smoothed capital interpreted as deviations from its steady state? Should its plot look stationary? The smoothed variable for capital from running fs2000.mod for instance is not centered at zero and fails a Dickey Fuller test (i.e. cannot reject unit root null hypothesis).

Hi,
in newer Dynare version, the smoothed value contains the steady state (which may be 0 if the model is linearized). Thus, you would not expect it to be centered around 0. If your Dickey Fuller test expects a mean of 0, then you will always detect a unit root, because the process does not return to 0.

Thanks for the reply! Great information, as always. 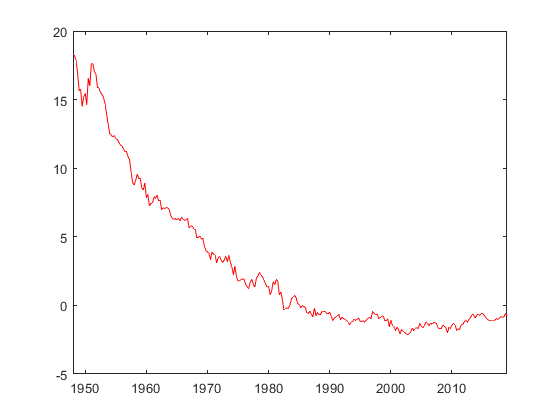 Regarding state uncertainty, this looks like what I’m after, although I’m having some difficulty unpacking it. To construct the width I’m going to need the critical value via inverse normal cdf, times the standard error; but it’s not clear to me how to unpack the standard error of the kth variable in period t. Any guidance?

Contains the series of covariance matrices for the state estimate given
the full data from the Kalman smoother. The M_.endo_nbr times M_.endo_nbr times T array
contains the variables in declaration order along the first two dimensions. The third dimension
of the array provides the observation for which the smoothed estimate has been made.