I am currently working on an small open economy DSGE model where as usual their is a combination of home and imported goods (usually investment and consumption). For policy purposes headline inflation is divided into three components: 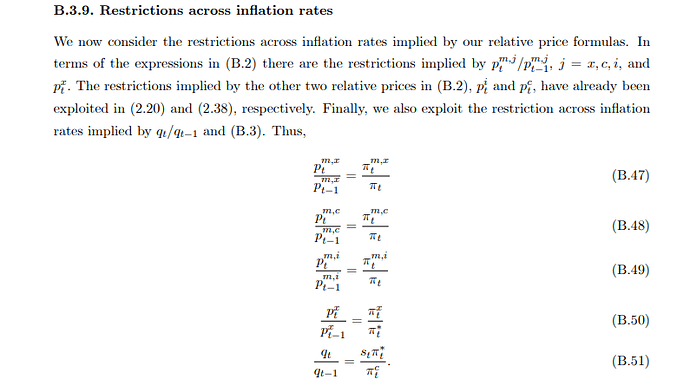 However, the problem is that in the data this inflations are very different from the inflation target of 3%, so the AR(1) processes structure would result in large forecast errors for this variables (even just only taking into account the mean of the process).

QUESTION:
Is their any way of modeling different steady state values for this inflation components given the relative prices restrictions usually imposed in this models?

I am not sure I fully grasp the theoretical complexity here. But usually having different inflation rates implies that relative prices will diverge over time. Unless this change in relative prices is counteracted by a different mechanism, this will imply a divergence in consumption shares and therefore render the model non-stationary, i.e. there may be no steady state.

ss this change in relative prices is counteracted by a different mechanism, this will imply a divergence in consumption shares and therefore render the model non-stationary, i.e. there may be no steady state.

Well for example authors like Lawrence Cristiano et al (2014)AER in their paper “Risk Shocks” show how to introduce different trends for investment and consumption - GDP that implies different growth rates (as usually investment growth is higher than consumption growth). This is also related to the fact that the relative price of investment has fallen over time am i right? So it is possible to keep a balance growth path with differences in their growth rates.

However, i have never seen a paper that do this for different inflation components. As you mention this would imply that for some theoretical reason growth rates from prices from one sector are higher (or lower) than in another sector.

Does anyone know anything about this subject?It would be very very helpfull.

The CMR (2014) paper is an example of what I mentioned. Due to a Cobb-Douglas production function, there is still a BGP. Investment to GDP is falling, but technology weighted investment to GDP stays constant. So there is an appropriate detrending available. The question is if something similar would work in your model.

Thanks for your quick reply as always mr Pfeifer,

Yes exactly in their model they include a different trend for investment and show that this is equivalent to have a declining investment to consumption relative price (which is what we observe in the data). They do this by scaling the whole model by different technologies and resulting in different growth rates. However the model asumption is that the relative prices of the rest of the goods like imported or domestic goods would be stationary and close to 0 basically (they would growth at the same rates). How can i turn my model equations to reflect that for example the imported goods relative price have fallen over time? (yes been non stationary but keeping the BGP)

No, they do not assume a BGP, but rather it is a direct result of the model features. You need to find out how that is consistent with a BGP. I doubt that is feasible. Particularly when it comes to food and energy there are non-homotheticities and decreasing energy intensities per unit of GDP at play.

there are non-homotheticities and decreasing energy intensities per unit of GDP at play.

Im sorry i did not understand what you meant here

Both items point towards some form of structural change that you are wading into when you try to model this explicitly.

So maybe what i could do is modelling the relative prices with a trend and solve the model with the difuse filter that allows non stationary models? However i dont like that approach very much because their is not a theoretical explanation of why the relative price of food has fallen over time…

That would not help. The problem is that the trends are non-uniform, so that no BGP exists. That renders Taylor approximations around a point increasing invalid over time. Estimation with perturbation techniques will then not work.

Ok thanks for your answers Mr Pfeifer. I would think this problem througth.