I’m a novice in Macro and Dynare. Recently, I read a paper:annotated International spillovers and exchange rate dynamics.pdf (413.0 KB)

As annotated on page 11, 17, and 22, Corsetti et al. first model the dynamics of Foreign country, and next given them, model the Home country. I expect it will produce more dynamics of Home country than usual SOE literature, i.e. directly setting exogenous Foreign variables be constant. (If my understanding was wrong, please kindly point it out, thx!)

So my question is how to input these solved Foreign variable sequences into Home equilibrium conditions to do stochastic simulation?

Or, to my knowledge, conventionally in Home country, we pre-set a bunch of parameters, pre-claim dozens of var and varexo, so there are no known time-dependent sequences, e.g. \{C^*_t\}^{\infty}_{t=0}, in the model. How to include them ? such that in the goods market clearing condtion, we can have:
Y_t= XXX*C_t+ZZZ*C^*_t.

I think they model a small-open economy that takes as given foreign variables. The only difference with part of the literature is that foreign variables (interest rate, output, inflation, etc) are not modeled as independent AR(1) processes, but they are linked together by the usual NK closed economy equations.

So what I would do is to simply write all the equations of the model (both domestic and foreign) in the model block. You will see that domestic shocks will not have any impact on foreign variables. But foreign shocks will have an impact both on foreign and domestic variables.

Thank you for your reply!

I think the most loose approximation is just to assume exogenous foreign variables constant (even normalized to 1). Or as you said, modelled as some stochastic processes.

To make our simulation rigorous, we can take all domestic and foreign equations into our model; block, I agree with you. Besides, “(D)omesitc shocks will not have any impact on foreign variables”, is probably due to SOE premise (such that Y^*=C^*, and so on, no room for domestic variables.).

But this method is already adopted in many papers (cf. Gali and Monacelli 2005, in Prof. Pfeifer’s mod file, y^*, c^*, \pi^*… are included.) In essence, it determines both Home variables and Foreign variables simultaneously.

Lastly, if I strictly intend to ascertain Foreign variables beforehand, I find some clues in Dynare Reference Manual, command varobs or partial_information. Yet they are in Estimation session. I never tried them. 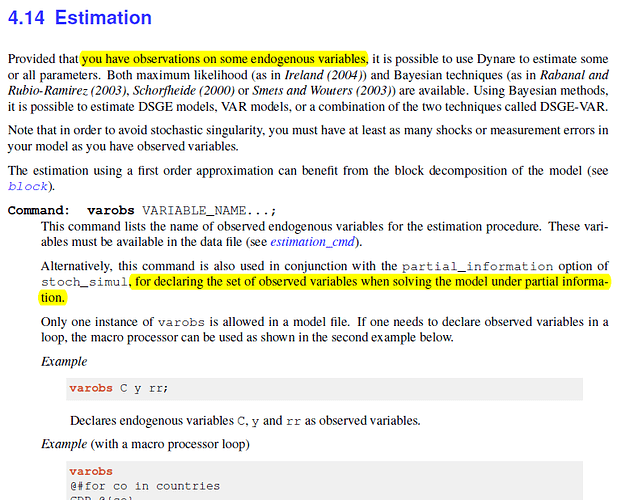 My thought above may contain errors, after all I’m complete new in Macro

. If anyone has any comments, please feel free to leave your messages

I am sorry HelloDynare, I am afraid I am not understanding what you are asking.

So what I would do is to simply write all the equations of the model (both domestic and foreign) in the model block.

According to this way, the following equilibrium would be written in one paragraph, and all Home and Foreign varialbes should be merged into one pair of parentheses, i.e.(y_t, \pi_{Ht}, …, y^*_t, \pi^*_t…), instead of splitting them into two.

Ok, I got what you mean. I am pretty confident that what I said you above was correct.

Thank you sooo much!! get it!!