Issue with the Kalman filter

I am very new to Dynare, but I have studied the program to the point where I have written a very simple model. This model seems to function well (steady states and simulation work fine), but the estimation of the model persistently fails with the error message:
“The forecast error variance in the multivariate Kalman filter became singular.”

I have tried several things to round the issue, but with very little success.
All tips to solve as well as explanations why this error rises would be very very much appreciated!

You have in your model

But you observe k and y. That’s where the problem comes from. The model says that the ratio of y and k is a constant \alpha. Plotting the ratio shows that this is not the case in the data: 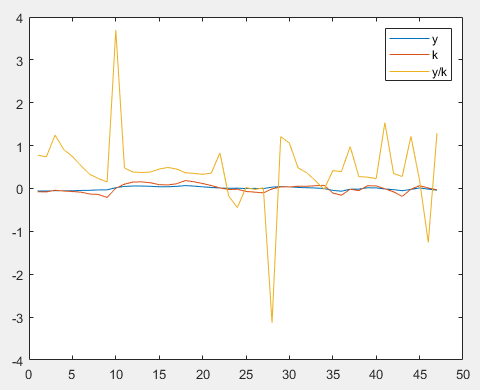 Hello professor Pfeifer and thank you very much for your prompt reply!

I do understand the issue now, but I still don’t know how to get around the problem. I have tried e.g.:

c) Adding new shocks, e.g. TFP shock to production function that follows AR1-structure, to break an exact linear combination.
→ Still, Dynare does not compute the simulation and the same error message come up.

Is there something else that I could try or am I missing something / doing some elementary mistakes in the code/data?

Another question that has puzzled me regarding Dynare:
I would prefer if the shocks on b-variables could only get values from the positive side of the normal distribution). How does Dynare/estimation react if I force the normally distributed shocks to follow some Gamma distribution by squaring the shocks? Or is there some other way to force the shocks positive (that would also work in the estimation)?

to verify that all of your variables are constant as they are not affected by the shocks. That explains the error message.
2. Regarding non-normal shocks, first have a look at previous posts like Models with non-normal shocks (Non-linear transformation of shocks)

Oh, there was an elementary mistake with the shock process!
Thank you very much for pointing out the two problems I had and for nudging me back on track! I will go through earlier chats regarding non-normal shocks too.