I am trying to replicate the paper Aoki Benigno Kiyotaki (2016) Monetary and Financial Policies in Emerging
Markets. My code works properly, but the impulse curves do not coincide with those in the paper (screen attached). Above this, the impulse curves for one of the shocks are not curves but rather short straight lines (attached).

What could be the problem? I checked many times that all equations are OK.

Thank you in advance for your precious help.
ABKmodelforum.mod (4.61 KB)
ABKmodel_steadystate.m (4.51 KB)

Your IRFs are explosive. Either use order=1 or pruning.

Thank you a lot.
If someone has a similar problem, it works when the order of approximation is set to 1 and all variables are replaced with exp(x) instead of x to linearize the model (do not forget to log the steady-state values).

You don’t need the exp()-part, only

If you don’t use higher order with pruning, the exp()-substitution inducing a loglinearization instead of linearization may actually help to prevent explosive simulations.

Apologies in advance for bumping this old topic, but I had a couple questions about the replication of ABK (2016) as well.

I suspect there’s an issue with my interpretation of the Fisher equation, or the steady state net nominal interest rate.

Any comments would be much appreciated. 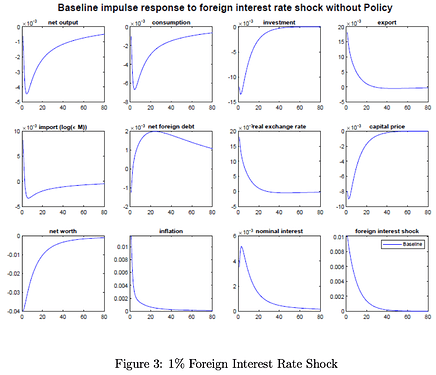 Why is your Fisher equation backward-looking?

That’s how it was specified in the ABK paper. If I change it to R=(1+i)/Pi(+1), then I get the following IRFs (attached) 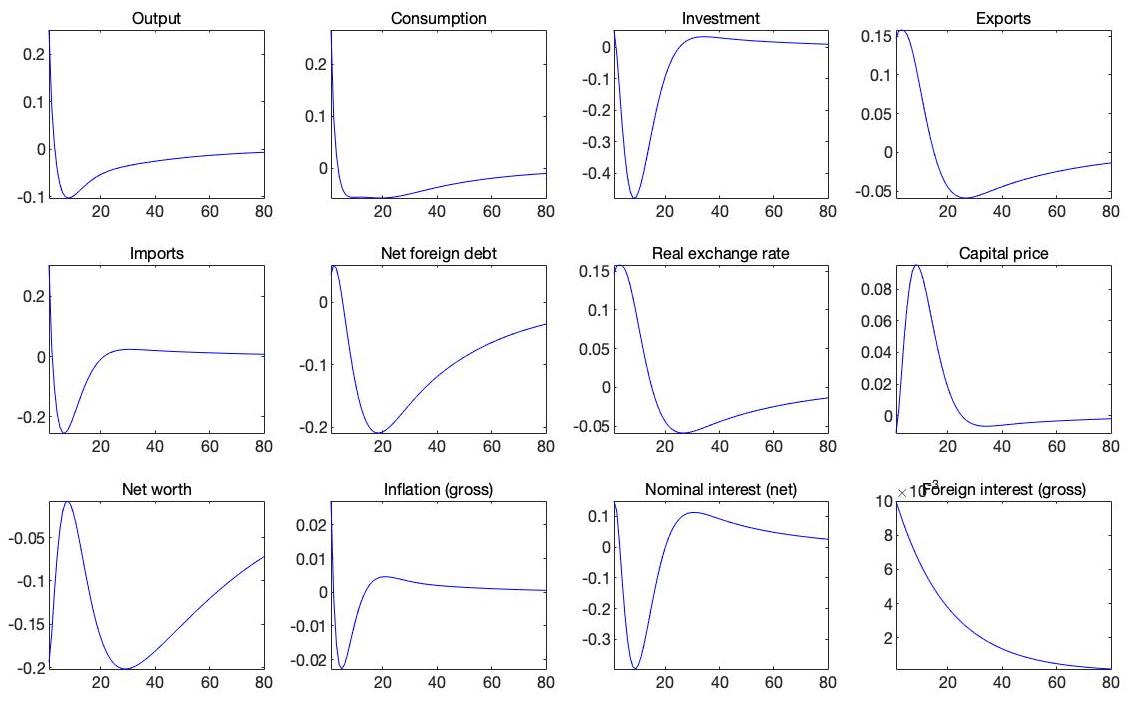 As this changes all IRFs you need to find out what is going on in the model. There is only one correct implementation.
When you say

For most of the variables I get well behaved IRFs,

that means that you still have not found the correct implementation. Have you asked the authors for their code?

Yes, I think that’s my only course of action… Thank you, jpfiefer!

I just wanted to provide an update: I managed to replicate the results in the ABK paper, and would like to share the code on here – I’ve noticed quite a lot of people on the net struggling with this paper, so hopefully this helps.

This file has been truncated. show original

Note that this only covers the baseline foreign interest rate shock experiment (figure 3 in the ABK paper).