It is possible to forecast shocks in dynare? 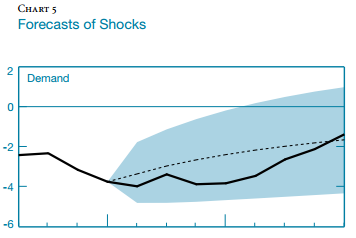 Notes: The dashed line represents the forecast of the relevant shock conditional on the posterior mean of the parameters while the solid line represents an estimate of the realization of the shock based on the Kalman smoother.

What is the definition of shocks here? By assumption, the innovations to a DSGE model are mean 0 and orthogonal to other information in the model. So they are not forecastable at all. What you can estimate is the value of the whole exogenous AR-process.

Thanks!! Demand shock here is the usual shock in the IS curve (in the paper). Thus, \delta_t.

This quote from the paper will clarify a little bit (sorry for the confusion).

“Chart 5 depicts the combinations of exogenous driving processes that, according to the estimated DSGE model, are responsible for the observed path of inflation, output, and the interest rate over the period we analyze. In each panel, the dashed line represents the evolution of the shock associated with the mean forecast while the solid line represents the sequence of shocks corresponding to the actual realization of the observable variables.”

It seems they take the estimated mean forecast as a restricted path, and then they call the structural shocks needed to match that path as “forecast of shocks”. Just speculating…

Lemme ask though, if my speculation above is the case and the mean forecasts are smooth (i.e., less variation), the structural shocks needed to match it will also be smooth, yeah?

I guess \delta_t follows an exogenous process with persistence. So they indeed seem to show the filtered values for \delta_t and compare them to the smoothed values.

Say, I have \delta_t = \rho \delta_{t-1} + \varepsilon^{\delta}_t…and I want to look at the importance of estimated demand shock in driving endogenous variables;

I would simply run a shock_decomposition.

I would simply run a shock_decomposition

Oh yeah, I see. The shock decomposition graph can also be used to study a given episode of the data. However, it seems it cannot tell you how endogenous variables will evolve in the presence or absence of a particular shock.

We have to pass the estimated smoothed shock(s) through the model to predict the path of endogenous variables for a given period of interest. Not sure we can see that from the shock_decomposition graph. Or we can?

It depends what you are trying to do. The shock_decomposition contributions decompose the model into contributions you would get when simulating the model with one shock at a time. If you suddenly want to shut off a particular innovation but still want the autoregressive component continue to decay to 0 you indeed have to run that simulation yourself.

If you suddenly want to shut off a particular innovation but still want the autoregressive component continue to decay to 0 you indeed have to run that simulation yourself.

Yes, exactly that. For example, in the figure below, The dashed line represents a counterfactual inflation rate conditional on the Kalman smoother estimates of all shocks except for one shock—say demand shock. Of course, allowing for all shocks to vary will recover the data. But one can shut some shock down to examine its importance over a given period (what I am trying to do).

In dynare, however, we can only shut ε^δ_t down via simult_(), and hence δ_t will decay over time to zero (as you said)…with no fluctuations.

The usual way is to indeed just shut off \varepsilon_t for t>t_0. Otherwise, there would be a discrete jump from the last value to 0.