Difference between log-post from mode_check plot and posterior from MH

I recently went through the slides by Johannes Pfeifer on DSGE estimation (from the Kobe lectures).

I understand that basically the estimation proceeds in three steps:

My question is: why do we need to simulate the posterior in step 3? From the mode_check plots, it seems as if we already have the posterior distribution? 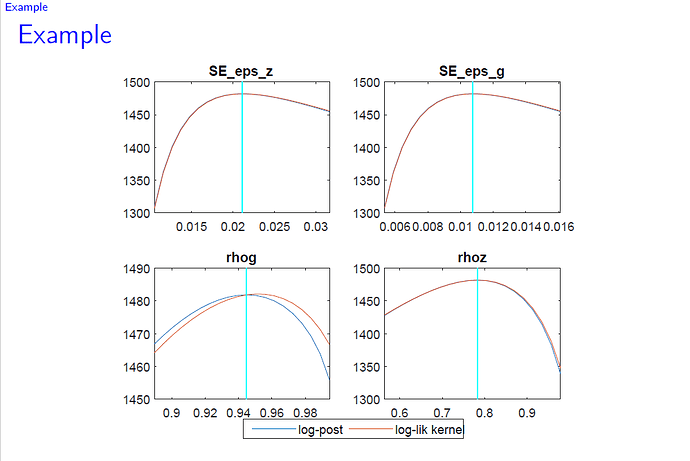 Thank you for the quick response! I understand the plots better now!

So you are saying that for the mode computation, say of rhog, we vary the space of the parameter rhog from around 0.9 to 1, while keeping the other parameters fixed. So each parameter is fixed at their mode then?

Moreover, when plotting the actual posterior distribution for rhog (obtained via the MH algorithm), what is the assumption on the other parameters? Are they kept fixed at their mode in this plot, while varying rhog?

I guess what i’m saying is: in both plots we only vary the space for one parameter and keep the others fixed somewhere, right? (I recognize that for the computation of the actual posterior, you allow for joint variation of the parameters in the MH algorithm.)

Thanks again for the explanation!
Cheers

For the plots, we only have slices through highly dimensional objects. So everything else is kept fixed for the plots.

The main difference is what you show on the y-axis (the joint posterior in case of the mode_check-plots, the posterior density of the individual parameters for the prior-posterior plots)

Thank you, i understand it better now!
Best
Kay