I am trying to proceed with a welfare analysis.

I read in previous posts that the change of sign matters, but for example in my case both regimes have negative sign for consumption equivalent. Which is the best policy, the one with the lower negative value?

Morever, does the values of welfare or consumption equivalence have an interpretetion on their own?

Update August 29, 2019: For those that interested, you can find the code to apply my explanation to your model at https://github.com/camilomrch/Code/tree/master/Welfare_evaluation.

@cmarch thank you very much for your help, it is really supportive.

Just one more thing to clarify. In a couple of papers the consumption equivalents are expressed as:

@cmarch thank you very much for your help.
it is really illustrative and hopefully i will manage to solve it.

However, i would like to ask one more thing. In one of the simulations i make i get the value of consumption equivalence i.e 178.43. As discused above shouldn’t the value of ξ be less than 1 in order to multiply it with 100 and have the interpretation you where saying? Because i suppose that the 178.43 value do not have an interpretation.

A value of more than 1, i.e. 100 in percent does not make sense as consumption would be negative. So there must be a mistake in your computations.

As of my reply above

Imagine the benchmark economy is the one with highest welfare. If this is the case, you will have a negative CE. The implication is that you would be willing to give up \xi \cdot 100 percent of consumption each period to remain in the pp economy.

How can I obtain a similar formula for \xi for models where the utility is not in logs and has leisure (or more complicated, where utility is not separable over time or arguments)?

The problem, in this case, is that the separation between (1+\xi) and the rest of the utility is not straightforward as in logs and hence it is not as easy to set everything in terms of E[W_1] - E[W_0] where the subindexes in welfare denote different models.

If you could provide any hint, thanks in advance!

Generally, this is not feasible. You can only do this numerically. See https://github.com/JohannesPfeifer/DSGE_mod/tree/master/Born_Pfeifer_2018/Welfare

Thanks! this is what I thought.

Another alternative, used by Paul Levine is to normalize the unconditional welfare wedge between 2 models by the increase in welfare obtained from a 1% increase in consumption. Then the utility units cancel and you get the Consumption Equiv. Variation too. 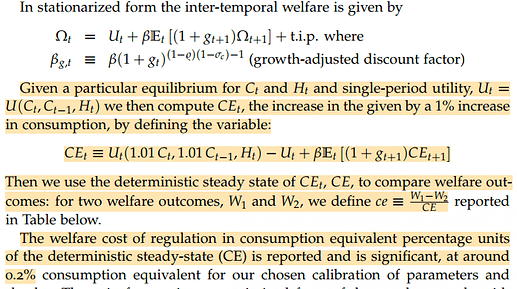 I’ll compare the outcomes with both; the numerical (yours) seems more robust though. Thanks again.