Basic question about wording in the paper

I have a basic question about wording in the paper. I am attempting to replicate Eggertsson et al. (2019). I just have one question about this paper. 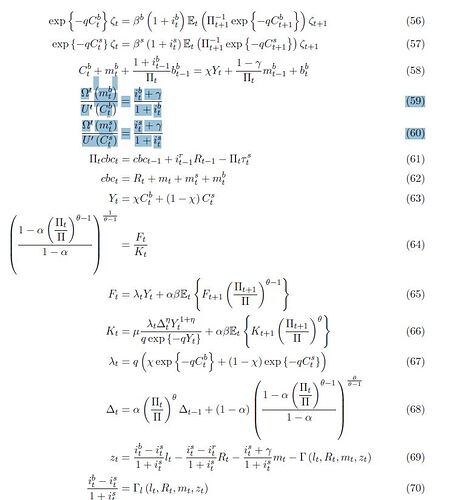 They did not implement the non-linear version of the model. If you look at the log-linearized equilibrium equations, there are no m^b_t and m^s_t. I think you should write the log-linearized solution in dynare instead - equation 83 to 95.

Thank you for the response. I think you are right that they used the log linearized equations to output IRFs. I am also curious to know whether they included m^s_{t} and m^b_{t} in non-linear equations to calculate steady state values of C^s_{t} and C^b_{t}.

equation 78 and 80 are steady state values…m^b shows up there, so yeah they included it, I think. Read steady-state part. Maybe spend a little more time to go through the paper again.

This is rather a strange paper. You are right about equation (78) and (80) but how can I figure out the optimal relationship between m^{b}_{t} and C^{b}_{t} if I am not given \Omega. I have been stuck on this problem for few months now. I have not gotten replies from the original authors.

What I am saying is: typically, money is residually determined in these model with a cashless limit. Given the interest rate, the real allocations typically follow and from this you can compute the money stock. Here, it seems similar, but the nonlinear system is before the cashless limit has been taken. So you would need to take the limit first.

Thank you for the response! m_{t}^{b} is a real money balance in this paper’s model and take part in the equation (58) (a.k.a budget constraint of borrower).

Thank you! This is a helpful response. I will search about what it means to be taking the limit.

See Woodford (1998): Doing without Money: Controlling Inflation in a Post-Monetary World at https://www.sciencedirect.com/science/article/abs/pii/S1094202597900065

Steady state equations are optimal relationships without the effect of shocks (thus zero shock) in the model. They are from FOC, so they are optimal. if you hold money, then you can not consume it, so consumption falls as it says in equation 78. Not sure what optimal relationship you are referring to though.

I have one question because I am struggling a lot currently. I did take a look at the paper that was provided by you.

which seem to turn into following equation.

I have following equation:

My question is, Did I correctly followed the procedure to derive the steady state values of variables in Cashless limit economy? If not, Could you please elaborate what it means to be taking the limit? For which nonlinear equation in Eggertsson et al. (2019) do I have take the limit? An example would be great…if possible. If not, I understand.

Sorry for the long question, Professor.

Have a great day,

Taking the limit as used by Prof. Pfeifer here is not taking the limit of some equation, I think. It is imposing an assumption that the fraction of households that hold money is zero. Equivalently
\Omega(\frac{M_t}{P_t}) = \phi log (m^j_t), \phi = 0 as you said before. But functional form does not matter here since \phi = 0, that is why maybe the paper has no functional form for \Omega().

So yeah, to derive the steady-state values of the log-linearised cashless limit model (pages 53-54), use the objective function, \sum \beta^t [U(C^j_t) - V(N^j_t)], and resolve the household problem.

Don’t solve the household problem with the objective function, \sum \beta^t [U(C_t) + \Omega(\frac{M_t}{P_t}) - V(N_t)] and specify that \phi = 0 for a cashless model in dynare. Maybe you can in this particular case, as \Omega' does not appear in the denumerator of any of the equilibrium equations for the model as any number divided by 0 is undefined which can cause problems in dynare. But m^j_t will still be in the other equilibrium equations of the household problem which you do not want. So yeah, use \sum \beta^t [U(C^j_t) - V(N^j_t)] for cashless model.

Thank you for the response! I have currently used your approach.

But note that \phi is negligible (approaches 0) in the cashless limit theory and not exactly 0. But we can not do that numerically, so \phi = 0 is just a numerical approximation to help solve the model by ignoring money in the household problem.