I want to calibrate my model using GMM/SMM, and I’m computing second moments from real data, but some problems have arose. How I’ve proceeded: 1) downloaded raw relevant time series (most having strong seasonal component); 2) deseasonalized the time series with X-13ARIMA-SEATS (didn’t control for any particular setting, just computed deseasonalized series from basic function); 3) converted deseasonalized non-rate series (e.g. not interests nor employment/unemployment rates) to logs; 4) Extracted cyclical component using two-sided HP filter with \lambda=1600 since my data is quarterly; 5) Computed Pearson correlation matrix between all series. From here only I’m only using the cycle component from the previous process, after all this I end up with 56 obs. Then some of my problems/doubts:

I’ve tried to be as rigorous as possible working with the data, but not sure if I’m mistaken in some of the procedure I followed, then I’d be very grateful if you may give me some clue if I’m doing it right or where should I check again, and also some advice in how to do the computations for GMM/SMM real data second moments and checking if those’re “correct”.

PD: Maybe if helpful, for example applying HP as described above to aggregate household consumption, gives me a cycle that looks like this: 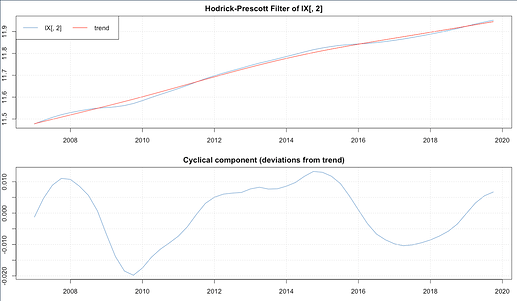 which seems like “too smooth” for me, and each cycle lasts very long (?), is that normal? Also noted that after the seasonal adjustment the data got a bit too smooth, nonetheless using data source’s seasonally adjusted data gives me very similar cycle but much more noisy.

I am not sure I am completely following. My thoughts:

Thanks for your answer!