I’m trying to solve a simple NK model with an OBC on the interest rate. The model solves, and I did a short simulation with a large preference shock in period 2 to get the constraint to bind in period 3. I was expecting period 2 to be the same between the piecewise-linear and linear simulation since the initial state is the same and constraint does not bind. I thought that OccBin didn’t account for an expectational (i.e., precautionary savings) effect of the constraint possibly binding in the future. However, I do see a small difference between the simulations. I assume either I specified the constraint incorrectly or OccBin does account for the expectational effect. Any help is greatly appreciated; thank you!

Here is the simulation: 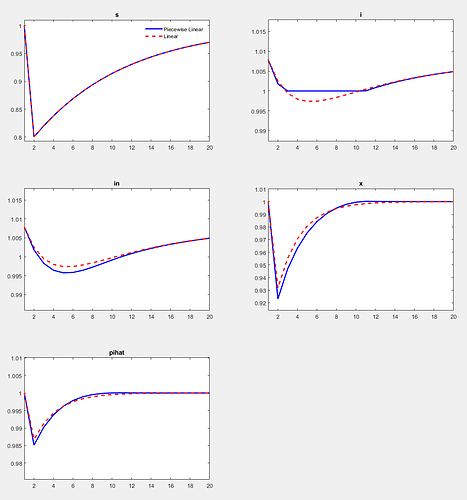 And here is the model file:
NKZLB_preference.mod (2.4 KB)

I thought that OccBin didn’t account for an expectational (i.e., precautionary savings) effect of the constraint possibly binding in the future.

The simple idea is that given today’s shock implies a binding constraint (at any point in time), the agent will have a different expectation about the future compared to the linear world.

In the linear world the agent might expect the interest rate to become negative at a future point in time.

In the piecewise-linear world the agent will expect that the interest rate will stay for a while at the ZLB.

This will also have a general equilibrium effect today, even if the ZLB is binding at a future date (given today’s shock).

However, this should not be confused with precautionary behavior.

Thank you for the quick and thorough reply. You make some convincing points and I’m going to have to think about this more. My first response is, when I go back to G&I (2015) and look at Figure 1, that the linear and piecewise linear solutions are identical when the constraint is relaxed. That means OccBin is not accounting for the constraint binding in the future. In fact, the authors say

The key is to understand that by design of the backward solution OccBin is accounting for the constraint binding in the future (conditional on today’s shock), but this should not be confused with precautionary behavior.

OccBin uses a first order approximation. Hence, we cannot model higher order events like the one you cited. Under the nonlinear solution your agent will account for the increased likelihood of a constraint becoming binding (even if it never binds). The agent will change his/her behavior compared to the piecewise-linear world even if his/her expectation implies a non-binding outcome (e.g. we are very close to the ZLB). In the piecewise-linear world your agent will only change his/her behavior today when expecting a constraint to become binding.

@nathrock What you allude here to is the effect of future shocks where moving closer to the constraint should lead to precautionary behavior. But in your mod-file, it’s not about future shocks but the current one. The agent perfectly knows that after the shock in t=2 realized that at period 3 the ZLB will be hit. This is just a matter of the information set containing the current shock and then tracing out under something like perfect foresight what this will mean for the future.

Thank you both! I was able to confirm what you are saying by turning the interest rate smoothing off (which does not appear in G&I (2015)). In that case the linear and piecewise linear simulations are identical when the constraint is relaxed (see figure here). It’s the endogenous interest rate state that makes it possible for the constraint to bind in the future on the perfect foresight/deterministic path (creating the differences in the linear vs piecewise linear solution/simulation when the constraint is relaxed). And I suppose a model with some other endogenous state variable(s) might cause differences as well. 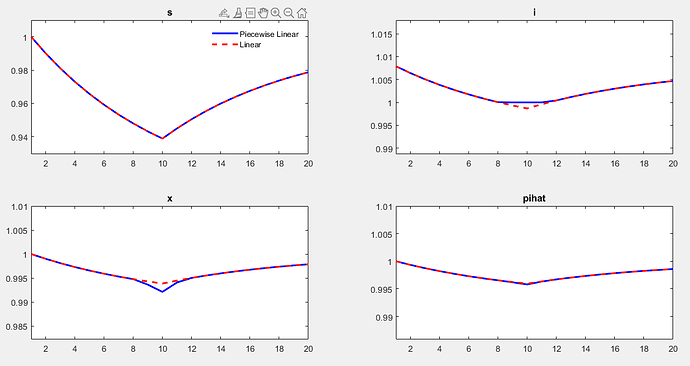