First I should say that I’m not actually using Dynare to estimate this model. Rather, I am using an MHRW algorithm as detailed here: Ch_4_Bayesian_Estimation_Own_Codes.zip - Google Drive

I’m trying to extend Slobodyan, Wouters 2012 to estimate a model with learning. To check the consistency of my MHRW algorithm, I’ve run two MHRW chains with the same starting point, so far with just over 800,000 draws, and then plotting the kernel densities of each of the estimated parameters. The model builds upon the Smets Wouters '07 model, but incorporates boundedly rational agents. 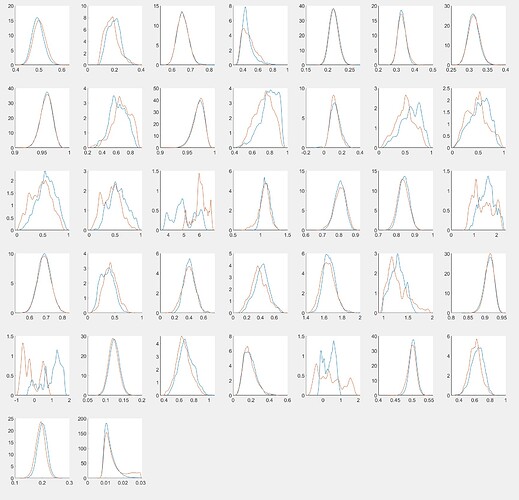 These are the kernel densities of each of the estimated 37 parameters. Each curve is a fitted density for each parameter draw. If both chains have converged to the true posterior, then kernel densities from two chains should be fairly close to one another.

Is there any way to improve my MHRW algorithm to get more consistent monte carlo chains?

My second guess is that maybe the MHRW proposal density needs to be changed so that the problematic parameters have a larger entry in the covariance matrix of the proposal density, which would force the algorithm to sample from a larger space of possible values for those parameters.

then kernel densities from two chains should be fairly close to one another.

I’m not 100% certain this is true. I think Johannes would probably be a bit better of a resource here for this.

Is there any chance those two mismatched parameters happen to be the persistence parameters on AR(1) processes?

If both chains have converged to the true posterior, then kernel densities from two chains should be fairly close to one another.

Yes, that should indeed be the case if you are sampling from an ergodic distribution. It’s the idea underlying convergence diagnostics like the Brooks/Gelman one. Note that it’s necessary but not sufficient. You could have two chains converging to the same wrong distribution.

The big question in your picture is whether you simply need more draws or whether a there is something like multimodality that definitely requires a different sampler. You could give the Tailored Random Block Metropolis Hastings a try. An example is at Particle_Filtering/run_filter_and_smoother_AR1_TaRB.m at master · JohannesPfeifer/Particle_Filtering · GitHub

You just gave me a new project, thank you!