May I kindly ask about the correlation between components of GDP (simulated in Dynare).

For a simple model with equilibrium condition, Y = C + I + G (and even for complex models), one can deduce from the IRFs whether the simulated series (C, I, G) will be procyclical or countercyclical (with respect to output). However, I have not been able to do the same for correlations between the components of Y (i.e., C, I, G).

Sometimes simulated C and I are both procyclical (with respect to output) but the correlation between C and I is either positive or negative.

Jespersen & Madsen (2013) have called the correlation between C and I (which can go either ways in actual data) a paradox since theory predicts that C and I should move in opposite directions.

Is this paradox somehow embedded in dynare such that correlation between, for example, simulated C and I is arbitrary, and hence can either be negative or positive?

My instinct tells me it is not arbitrary, but I have not been able to see that from other parts or other results of the model.

Any help to clarify this is very well appreciated. Many thanks!!!

Can you maybe provide quote or screenshot from the reference you provide. I have not seen this before. 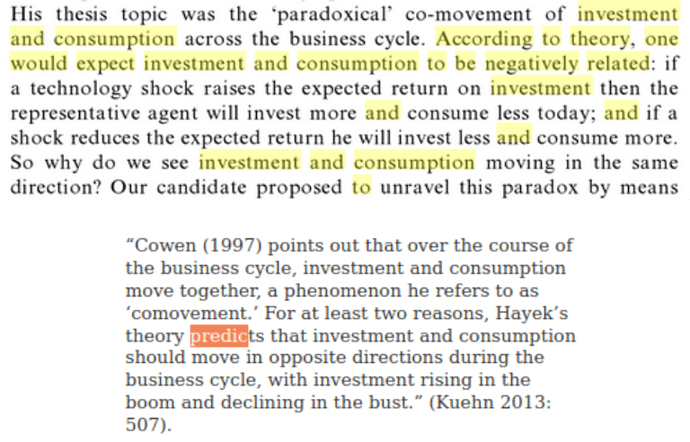 Now I am confused. This is a statement about theory, not actual data. There is a variety of shocks that result in a different responses of output and consumption. For a TFP shock, you get comovement between C and I. For financial shocks, that is often not the case. So where is your problem?

Thanks Prof. Pfeifer for the reply,

Sorry for getting you confused, but I think I understand now.

There are different shocks in the two mod files though (more than one shock actually). So then, the correlation between C and I could go either way depending on the nature of the shocks in the model, if I get you right.

So, for example, if you have both TFP shock and financial shock in the model, then the correlation between C and I could either be negative or positive.

But on why dynare also has this property, I think I understand now, that it depends on the nature of shocks in the model. Many thanks for your time. I really appreciate it!!!

In a multi-shock model, how to get the correlation of simulated variables for each shock. Is it stored somewhere in dynare’s output?

Please do not double-post. See

No, it is not. You would need to shut off all other shocks manually.