Can you do variance decomposition after running simult_

Can you do variance decomposition after running y_=simult_(y0,dr,ex_,iorder);?

What do you mean with that?

In my understanding of Stéphane Adjemian’s paper on optimal monetary policy (in the counterfactual part), they obtain estimated structural shocks from a model with Taylor rule, and then they simulate the path of the main macroeconomic aggregates under the Ramsey
policy. I think that can be done using y_=simult_(y0,dr,...);

But they also do variance decomposition under the Ramsey counterfactual scenario, it seems. 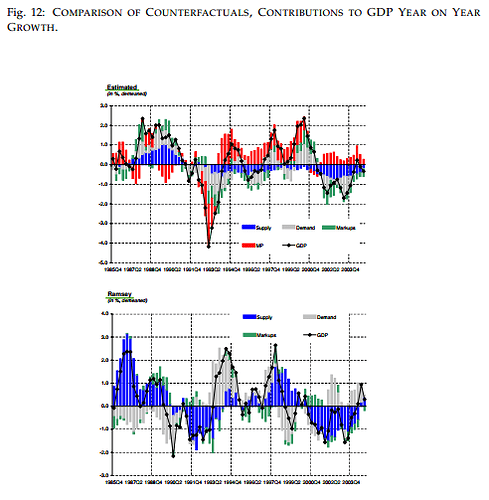 This is just a historical shock_decomposition, which can also be done with a ramsey_model.

I see. Thanks. But then the estimated shocks (used to get the decompositions) will not be the same in the Ramsey model and the Estimated model, yeah? In the paper, it seems they used same estimated shocks in both models. Maybe I misunderstood it…

Under Ramsey, you would run the decomposition for the same data with the estimated parameters, but with Ramsey policy instead of the rules you had before.