Dear all, I have to run the TANK model of the paper in the title where the probability of becoming hand-to-mouth (call it s) depends on tomorrow aggregate output: s(Y_{t+1}).
I have written s among the parameters (in Dynare) of the baseline model where s was exogenous; but now that s is endogenous, how can I write the fact that s depends on tomorrow aggregate activity?

Thank you very much in advance.
Marco 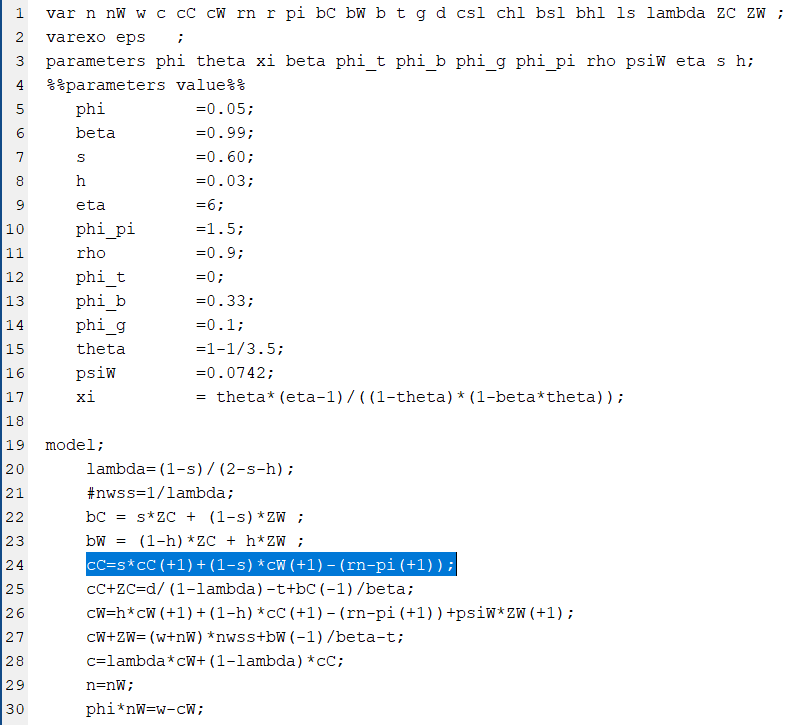 You cannot work with implicit definitions of functions. You need to specifiy what the function s() is.

Thank you. I specify s=kappay(+1) and in Dynare given that the model is in log-linear terms, I’ve written the log-linearized function for s as: s-0.5= kappay(+1) ,given that the steady state for s is 0.5 and for y is zero.
Now, my problem is that I find the same impulse responses for different calibration of kappa… if the risk is counter-cyclical (kappa greater than zero in my model), I should expect that government spending crowds-in private consumption while if risk is pro-cyclical ( values for kappa less than zero), I should expect that government spending crowds-out private consumption. However, in both cases I find that government spending crowds-out private consumption even for k=6 which is a high value as you can see in attached.
Thank you very much!
tankcw1.mod (1.3 KB)

I get a BK violation with the attached file. Did you check whether kappa even affects the decision rules?

1)As regards BK violation, it depends on the value of k; for example with k=1, k=0.80, k= -0.40, k=-0.20, the BK conditions are satisfied and irfs are displayed. Sorry for having attached the file with the wrong value of k…
2) k affects for example the consumption rule via s and via 1-s; therefore, my model should work once I’ve written the equation for s as: s-0.5=kappa*y(+1).
If you try first with counter-cyclical risk i.e. k=0.80 for example and then you try with pro-cyclical risk i.e. k=-0.40 for example, you get the same IRFs in response to a government shock… and this is very strange

From what I can see, the s indeed does not affect the solution for the model variables. s moves differently, but no other variable does.